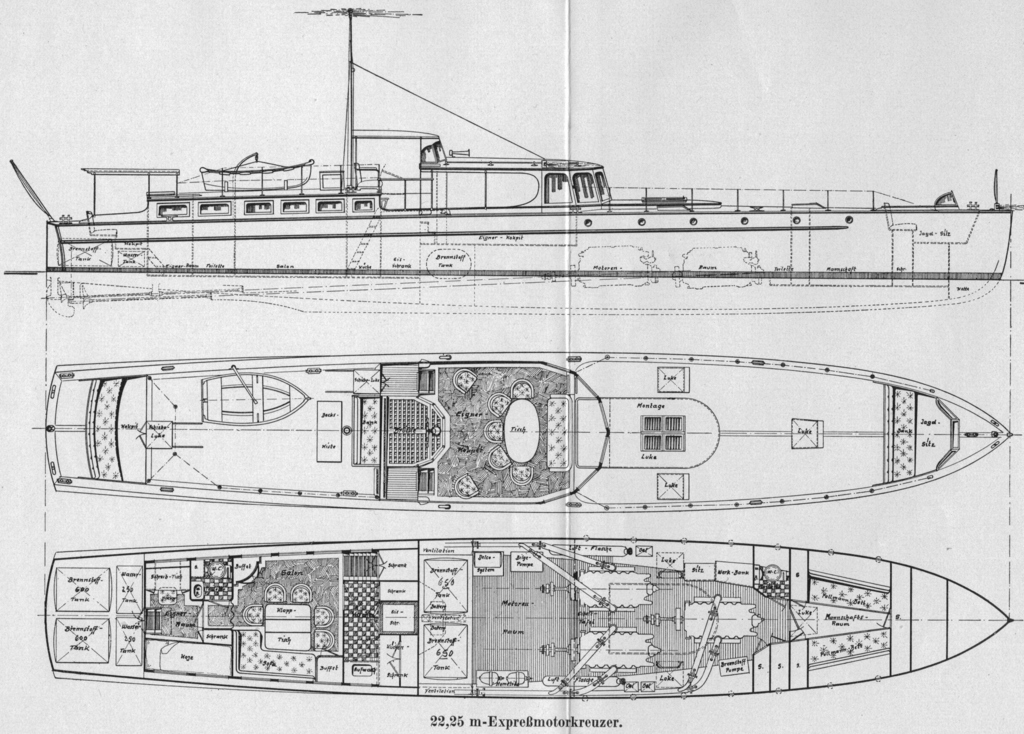 Kommentar av Anders Værnéus den 27 Augusti 2010 kl. 14.10
För er som vill veta mer om Marlins öde kan ni läsa detta:
Length 51ft. 6in.; Beam: 12ft. 6in.; Draft: 3ft.; Engines: twin sterling Dolphin six cylinder, 1052 cu. in. total piston displacement; Hull: double planked mahogany.
In the early years of this century the great business tycoons, whose mansions lined Long Island Sound, commissioned fast and rakish yachts in which to commute to a Manhattan mooring handy for their Wall Street offices. Neither roads nor railways could compete. The owner could stroll down to his private dock in a bathrobe, step aboard, breakfast with the morning paper, bathe and dress for business, all within the hour or so it took to reach journey's end, cruising at close to 30mph. It was by no means a cheap way to travel. Commuter yachts were costly to build and required professional crews to handle them. Their high-powered engines, developed from those used in World War I pursuit planes, demanded skilled attention. Perhaps three hundred were built over a thirty year period, of which 50 remain in use today.

In 1929 Edsel Ford commissioned the noted naval architect, Walter McInnis, to create a mahogany hulled commuter/sportfisher on the lines of earlier successful boats. Built in the yard of Fred D. Lawley of Quincy, MA, Marlin was delivered to Ford in Florida in late 1930. Within the lean hull was a cabin with accomodation for four. There were spacious cockpits fore and aft, the after cockpit supplied with auxiliary steering and engine controls for trolling at sea. After Ford sold Marlin in 1935, she was registered to several corporate owners before seeing duty with the US Coast Guard during World War II.

After a complete overhaul following her discharge at the end of the war, Marlin was purchased by the Yellow Cab Company of Cambridge, Massachusetts and it was during this period that Marlin became acquainted with Massachusetts politics as she was at the disposal of the late Governor, Paul Dever. In 1952 Joseph Kennedy - could he have recognized her fine drawn rum-runner's lines? - purchased the yacht and the reconditioned Marlin voyaged to Hyannis Port, the Kennedy family summer retreat. There she became a wonderful escape for the growing Kennedy clan, spending the summer in New England, the winter in Florida. President John F. Kennedy, who had grown up sailing small boats off the New England coast and who served with distinction in World War II as commander of a US Navy patrol torpedo boat in the Pacific, found in Marlin a relaxing escape from the pressures of office and she took on the role of 'unofficial presidential yacht', complete with pennant.

Constantly accompanied by the press and always surrounded by the public, both the President and First Lady found Marlin to be a haven. Old film reels tell of simple summer pleasures involving the Kennedy family and relatives, including Ted, Robert and Ethel Kennedy, their children and friends such as the young astronaut John Glenn and his wife. JFK also used Marlin for important meetings with his cabinet, far away from the formal backdrop of political Washington. It is on record that John F. Kennedy was cruising on Marlin with his family when he was informed of the construction of the Berlin Wall. ...he had not anticipated what would happen on that warm August afternoon in 1961 when he set out from Hyannis Port, Mass., on the yacht Marlin loaded with family and his favorite picnic dish, fish chowder, writes Hugh Sidey in his Time Magazine article of 1989. Brigadier General Chester Clifton gave JFK the news and he immediately returned from Marlin and went into conference with Clifton. It was a sombre President who cut short his vacation and returned to the White House.

When Marlin was about 32 years old, she received a brand new bottom. Twin Chrysler V-8 engines rejuvenated her spirit and fresh paint brightened her features. Marlin's passenger list meanwhile grew more interesting, ranging from figures in government to members of the ever-expanding Kennedy family. After almost 20 years, the Kennedy family decided to donate the yacht to a Florida university. During the voyage south she struck heavy weather and ran for shelter at Greenport on Long Island suffering some damage. Eventually she was auctioned by the University, purchased and repaired by the present owner who recognized the unique significance of Marlin. Found within were many items that the Kennedy family equipped her with: including gimballed fishing chairs, a wooden paddle carved with Ethel Kennedy's name, cutlery engraved 'Marlin' and similar napkins, navigation tools - compass, slide rule, dividers, many nautical charts (circa 1960) with unidentified handwritten notes possibly in the President's hand, a United States flag seen in many photographs, and many letters relating to Marlin's construction and subsequent history.