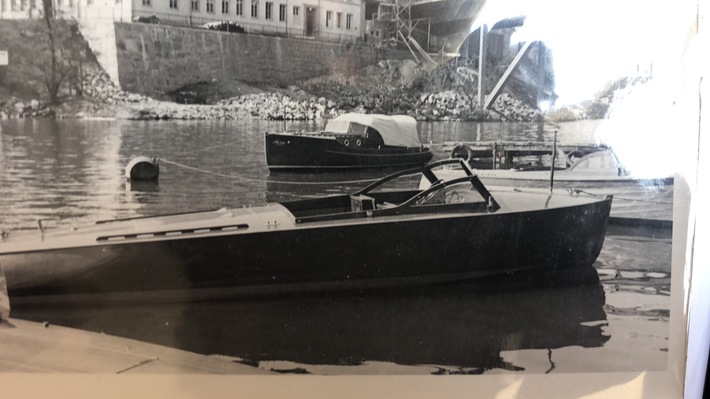 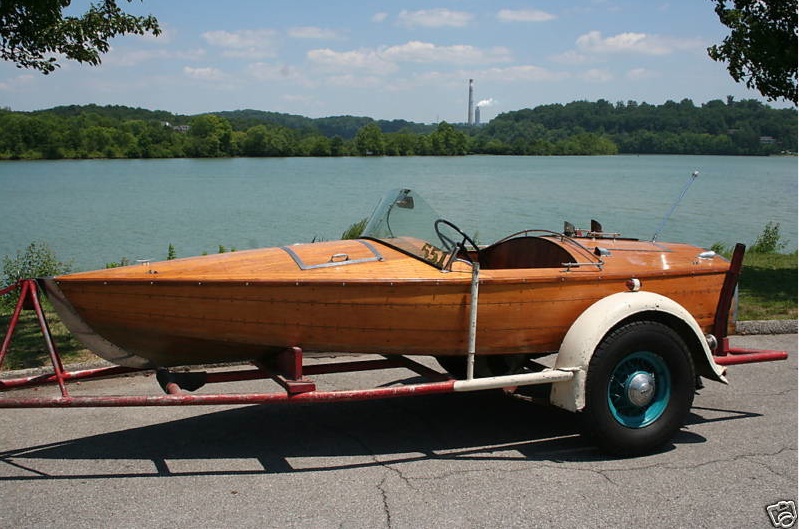 Here is “just another old wood boat”, or at least that’s what the guy who sold it to me said. Boy was he ever wrong, in lots of ways! After spending several years, and hundreds of hours, I’ve painstakingly traced this “old wood boat’s” history and spoken with former owners to document its complete history. I’ve even created a complete album with all of my notes, pictures and reference documents. The album will go to the lucky buyer. Please understand I do need to sell this, but I’m not going to give it away. There is no warranty of any kind, so be sure to ask any questions before you buy. I’ll accept a $1000.00 deposit, within 3 days of auction end. The deposit will be refundable only if upon inspection the boat is not as advertised. Otherwise, no refund. Boat will leave my possession only after guaranteed funds have been received and accepted by my local bank. I can possibly assist with delivery, please work details out with me before you buy. Now to the boat:

It was built in 1939. Originally designed as a twin cockpit but soon modified to adapt it to the 1939 Ford V-8 60. The engine was built with many early cast Eddlebrock parts including the aluminum heads and intake. The engine was built by Tom Barnett who later went on to the Monsanto Corp. and invented something to do with a product called linoleum... The boat was built by Bill (Steamboat) Hofmann next to Sloan’s Lake in Denver, Co. It has Oak frames and Okoume Mahogany for the rest. It was originally owned by three people: E. VanDersarl, Martin Bossen and Theo Moher. Theo Moher was the man who did most of the engineering. Mr. VanDersarl was the one with money and Mr. Bossen was the master of building. These gentlemen owned the boat through WWII and shortly thereafter sold it to Mr. Ray Batt. Mr. Batt owned the boat in the late 40’s and 50’s until he sold it to Bob & Elise Simpson in 1956. They owned the boat until 2005,when as Mrs. Simpson told me, she was ripped off by a junk dealer. He kept the boat for a few months and I bought it in 2006. There is fellow named Bill Mattocks in Denver who supplied me with the early history on the boat along with some interviews of relatives of Mr. Bossen. Mr. Mattocks was inducted into the Colorado Motor Sports Hall of Fame this past April. This boat is unique because it is the first prototype inboard/outboard drive built by Bossen and his friends. Mr. Mattocks was 16 years old when he personally helped to launch this boat. He remembers Mr. Hofmann building it. Mr. Bossen later received a patent for his design on Sept. 11, 1945. Unfortunately he was also a big gambler and would shortly thereafter lose his patent in a poker game. Mr. Mattocks provided me with a picture that includes him, Mr. Bossen, and others, taken at the Flamingo in Las Vegas shortly after Bugsy Siegel opened it in the 50’s. The picture too, goes with the boat. I know of one other Bossen drive that is located in Indiana. That gentlemen purchased his in Denver several years ago and it is one of the later drives Bossen was producing to sell. I can go on and on and on providing details. The bottom line: this is a one of kind, historically significant, marine item and belongs with a collector or museum. You will get the boat, all of my research, the Flamingo picture, Mr. Mattocks and Mrs. Simpsons information, a 1941 Sloans Lake program that list this boat and its owners, a copy of the patent, and a very detailed research on the history of the stern drive. Those who think Mr. Strang or Mr. Wynne invented the I/O drive are dead wrong and I can prove it. This boat is one of the very earliest I/O drives ever successfully built. The only person who is known to successfully build this type of drive earlier was a man named Reilly out of California. Some of the other interesting items on her are her early Ford Kelsey Hayes wire wheels, Auburn Automobile hub caps, Hudson steering wheel, chain drive steering, dual Stromberg model 81 carb.'s and the ability to rotate the drive 360 degrees while it is running. It is direct drive. This boat is 100% all original with all original wood and parts. She did not come with the windshield originally, Mr. Batt added it when he got her. There is not any rot anywhere! It has spent its entire life in garages and maintained with incredible care. I never thought I would sell her, but I just don’t have a choice. I’ll answer all questions I can when I’m not at work. If you are serious about buying, send me your telephone number and we’ll talk. Good Luck!